5 July 2017 – The Wednesday Demonstration: Today in Hamburg, too 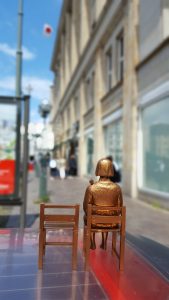 Today is Wednesday. Wednesday is the day when survivors of the comfort station system and their supporters protest in front of the Japanese embassy in Seoul, Korea. Today marks the 1290. Wednesday demonstration.

The objective all protestors share is to restore the dignity and human rights of the comfort women.

Among the protestors sits the bronze statue of the girl, welcoming the supporters, directing their gaze towards the entrance of the embassy.

Today, this girl in Seoul is joined by the girl in Hamburg. 11.189 kilometers away from the protestors in Seoul, she sits in front of the Japanese consulate at Rathausmarkt in Hamburg. Her mind seems to be with her comrades in Seoul, her gaze is firmly fixed on the building where Japanese officials are busy to prepare the visit of Japan’s Prime Minister Shinzo Abe.

It is by no means the first time that the comfort women and their supporters demonstrate for their rights here in Germany. In fact, at exact this same place, in front of the Japanese consulate in Hamburg, a group of demonstrators delivered the women’s demands to the Japanese consulate on Wednesday, 7 December 2011. On this date, when the 1000 Wednesday demonstration took place in Seoul, many other people took to the streets to fight for the rights of these women: in Berlin, Cologne, London and Amsterdam, in New York, Melbourne, in Tokyo and all around the world.

Mr. Abe, when you come to Hamburg tomorrow you should be aware: Every way you take has already been set foot on by the old ladies with the young minds …

Dear readers, we hope you join us again tomorrow to learn more about the reasons for the establishment of military „comfort stations“.