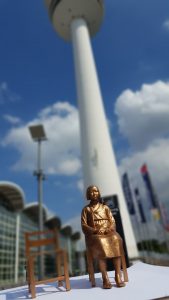 Three and a half years ago, in September 2013, the city of Hamburg had the honor to be visited by Ok-Seon Lee, one of the survivors of the „comfort women-system“. In her speech at the University of Hamburg, Ok-Seon Lee (at the time 86 years old) emphasized how important it is to speak about the fate of the women and girls who were drafted for military sexual slavery by Japan. „Most Japanese don’t understand that Japan committed a crime,“ she told the audience composed largely of students. „They have to learn that it is necessary to sincerely confront their wartime past.“

Ok-Seon Lee was drafted in 1942, when she was 15 years old. Here you can listen to her in a BBC-interview.

„I was running an errand for my parents,“ Ok-Seon Lee recalls, „when two Japanese men in uniform grabbed my arm and dragged me away. That’s how I became enslaved.“ She was deported to a „comfort station“ in northeast China, and raped by the Japanese occupation soldiers every day for three years, until the end of World War II.

„We didn’t even know the war had ended. The owner of the brothel ran away. I was inside with seven girls, and we were starving,” she remembers. „A soldier came in and told us to run. The whole city was burning.“ Like many Korean women, Lee did not return home. Injured, ashamed and without money or hope to return and be reunited with their families, they had to make a living in China. In the year 2000, Lee finally returned to South Korea, where she now lives in the House of Sharing, a residence for survivors that also houses a museum.

Ok-Seon Lee’s story is not unusual. Japan had taken control of Korea in 1910, and with the expansion of military ambitions in 1937, Japanese officers wanted to provide their soldiers with „sexual outlets“ on a massive scale, offering them sexual access to women as compensation for lengthening terms of service under deteriorating conditions and harsh discipline. The Japanese army thus drafted ten thousands of underage girls from the Japanese colony Korea by force and deceit, and brought them into occupied territories and warzones.

In addition, Japanese military men and their civilian collaborators sexually enslaved women and girls from Taiwan, China, the Philippines, Burma, Thailand, Vietnam, Malaysia, Indonesia (then the Dutch East Indies), the Netherlands, East Timor, Australia, and Japan. Today, many of their stories are documented in the Women’s Active Museum on War and Peace.

The majority of the victims were explicitly picked as underage girls, because the Japanese army expected them to be infected with sexually transmitted diseases at far lower rates than older women. Other victims, however, were older, often taken-away from places where they worked to support themselves and their families and neighbors.

The girls and women were outright kidnapped or deceived because they were poor and threatened due to the conditions and rationalities of colonialism, war, occupation, and patriarchy. Many were simply at the wrong place at the wrong time, raped on the spot and then taken to a „comfort station“.

When we look at the girl statue in front of the Fernsehturm (Hamburg’s old TV tower) today, we have to remember, that the little girl in the traditional Korean dress represents the fate of many girls and women, from various cultural and religious backgrounds.

That so many of the survivors had the courage to speak out and to fight for their dignity and their rights is a precious gift – a gift which they present to all of us.

Now it is our call what we make of it.

Dear reader, we invite you to join us again tomorrow to learn more about Japan’s denial of responsibility for the military sexual enslavement women and girls during World War II, and in particular about Prime Minister Shinzo Abe’s role.