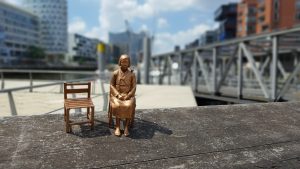 In a busy area of Seoul, South Korea, a girl in a traditional Korean dress sits on a chair, her fists balled in her lap. She looks quietly forward, her expression unsmiling and determined. Her feet are bare, and on her shoulder sits a small bird. Besides her we see a second chair. It is empty: an invitation to sit next to her, an invitation to join her.

The statue was erected by the Korean Council for the Women Drafted for Military Sexual Slavery in Japan and other civic groups and individuals on 14 December 2011 – the day of the 1000th Wednesday Demonstration – a protest that has been held by survivors and their supporters outside the Japanese embassy in Seoul every week since January 1992. The bronze figure reminds us of the so called “comfort women” – women and girls that were forced into sexual enslavement for the Japanese soldiers during the Asia Pacific War between 1931 and 1945.

The initial idea of the organizers was to create a memorial stone for the women and girls who had become victims of sexual violence by Japanese soldiers. Japan, however, harshly objected the erection of such a memorial stone. In fact, the Japanese government still refuses to admit its direct involvement in the forcible drafting of women and girls and the establishment of “comfort stations”.

Provoked by the Japanese attempts to cover-up the truth and bury the suffering of the victims into oblivion, the survivors and their supporters decided to replace the memorial stone idea by a new plan: the Statue Of Peace – the bronze of a young girl, which is positioned opposite the Japanese embassy in Seoul, staring at its entrance, following Japanese diplomats come and go every day.

Ever since its erection, the statue has sparked international incidents, threatened trade deals, and exposed deep and bitter rifts between Japan and South Korea that go back more than seven decades. It has turned out to be so powerful that artists Seo-kyung Kim and Eun-sung Kim started to erect dozens more: in Korea and many other countries, including the UK, the US, Canada, and Germany.

Wherever the statue is set up, Shinzō Abe and his government make every effort to obtain its removal. Last year, the mayor of Matsayama (the Japanese partner city of Freiburg in South Germany) successfully stopped the erection of the statue in one of Freiburg’s public parks. When the statue was then erected in the Nepal-Himalaya-Pavillon Park in Wiesent – a private park close to Regensburg – on 8 March 2017, Japanese officials immediately started to urge the park-owner to remove it, spamming him with hate-mail and threatening him.

Here in Hamburg, the statue of the girl is currently attracting considerable attention. She protests in front of all of the buildings our city is proud of: the Elbphilharmonie (Concert Hall), the Rathaus (City Hall), Hamburg’s landmark church Michel, and the lighthouse in Blankenese. The girl statue also sits in front of the Japanese embassy, the Messehallen (the Trade Fair Halls that are the site of the G20 meeting) as well as the surrounding areas where the AntiG20-protests take place.

Dear readers, join us again tomorrow to learn more about the fate and the courage of the women and girls that came from all over Asia, from the Netherlands and Australia