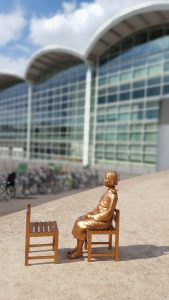 At the sidelines of the G20 summit in Hamburg, Japanese Prime Minister Shinzo Abe and the newly elected South Korean President Jae-In Moon met for the first time face to face.

Moon, a former human rights lawyer, had pledged to renegotiate the 2015 bilateral Japan-Korea deal to resolve the comfort women issue during his electorial campaign. In an interview with the Washington Post in June he stated: „The comfort-women agreement that we made with Japan during the last administration is not accepted by the people of Korea, particularly by the victims. The core to resolving the issue is for Japan to take legal responsibility for its actions and to make an official apology.“

During their meeting this past Friday in Hamburg, Abe reportedly pressured Moon, stating that the implementation of the 2015 „Comfort Women Agreement“ would be „an indispensable base for building the future-oriented Japan-South Korea relationship.“ Moon responded cautiously that South Korea and Japan should make joint efforts and resolve the issue wisely. It „must not become an obstacle to the development of other relations between the two countries,” he said.

Japan and South Korea struck the controversial “agreement” in December 2015 behind closed doors to “finally and irreversibly” resolve their dispute over the “comfort women.” The deal included an expression of remorse from Japanese Prime Minister Abe and a one-time payment of US$8.5 million to the Korean government, so that „projects for recovering the honor and dignity as well as healing the psychological wounds of all former comfort women can be carried out“. In return, the then Korean government agreed to „refrain from accusing or criticizing Japan in the international community“ and to work on the removal of the girl statue built in front of the Japanese embassy in Seoul.

This deal, however, infuriated survivors and their supporters who were never once consulted in the negotiation process. Survivor Bok-Dong Kim (born 1926) expressed her anger: „Do they think we’ve been fighting for this long for the money? We’ve been getting living expense support from our government and NGOs are taking care of us. We’re not asking for the money. What we want is a legal reparation. That is to admit that they committed the crime as a criminal state.“

The women and their supporters in South Korea demand an official and definitive apology from the Japanese government, direct reparations to all survivors, an acknowledgement that the systematic establishment of the “comfort station system” constituted a crime as well as official engagement in awareness-raising (i.e. the investigation of the facts, appropriate history education, and the erection of memorial stones).

Another problem with the deal is that it is only bilateral – even though women from North Korea, Taiwan, China, Malaysia, Myanmar, Vietnam, Indonesia, the Philippines, East Timor, Singapore, and the Netherlands were also sexually enslaved. When Taiwan’s President Ying-jeou Ma called on the Japanese government to make a similar deal between Japan and Taiwan, Japan merely commented that the Taiwanese case would be diffeerent from the Korean case and refused the proposal.

It becomes clear that Japanese Prime Minister Shinzo Abe has no intention of acknowledging Japan’s responsibility and resolving Japan’s human rights violations during World War II. Instead he tries to silence the survivors and to ultimately get rid of the problem.

However, Abe has made his calculation without the women and their supporters. The resentments of the victims brought citizens together who raised their voice demanding the nullification of the agreement. More than 400 Korean civil organizations and more than four-hundred citizens established the Nationwide Actions Demanding Annulment of the Korea-Japan Agreement on the Japanese Military Sexual Slavery Issue and Pursuing Righteous Resolution. They have been backed-up by UN Human Rights Bodies such as the „Committee on the Elimination of all Forms of Discrimination against Women (CEDAW).

Mr. Abe, a sincere, compassionate apology given to the survivors would help. It would show the world that the Japanese understood that they harmed these women and girls, and that they are willing to take responsibility for their actions. Only then can a process of reconciliation begin and bilateral relations be permanently secured.