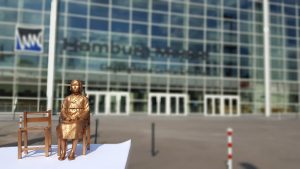 One week ago, on 29 June, Germany’s chancellor Angela Merkel spoke at a conference on sexual violence in armed conflict. “The most important thing”, she emphasized, “is to end the silence.” She explained that this can only be done when, first, victims are supported to speak out and, second, perpetrators are held accountable.

One crucial condition for this to happen, Merkel continued, would be to bring peace to war-torn areas, to stabilize post-war societies, to rebuild a strong political system and introduce gender equality. In this spirit, she also promoted the “Women’s Entrepreneur Fund” that the G20 ministers will establish during their meeting in Hamburg tomorrow – a fund designed to support “young female entrepreneurs in developing countries” under the leadership of the World Bank.

While we appreciate that Germany’s chancellor is ready to confront the issue of wartime gendered and sexual violence, we are disturbed by this approach. The German government seems to see sexual violence as a deviance from a “normal order”, that is a lack of “good governance” which is perceived to be a problem in the Global South. In this logic, the solution to end wartime sexual violence lies primarily in re-establishing and „restoring“ order and providing protection for women. This, however, risks to reduce the phenomenon of wartime rape to an aberration and fails to take into account that armed combatants and state soldiers all over the world perpetrate sexual violence (including UN peacekeeping troops).

If Angela Merkel wants to live-up to her claim that Germany combats wartime sexual violence and supports the victims, she must go beyond this approach and take the opportunity this weekend at the G20 summit to talk to Japan’s Prime Minister Shinzo Abe.

For many years now, Abe has refused to accept the Japanese responsibility for forcing up to 200.000 women and girls into military sexual slavery. In his view, this seems to be a question of honor, not a question of human rights.

After 40 years of silence, the survivors have taken the courage to speak. The women who are now in their 80s and 90s demand a sincere apology, compensation and the education of youth on the history of Japan’s wartime sexual violence.

They are not asking much. They are asking what is right.

Mrs. Merkel, help to end the silence! Pay respect to the courage of the „comfort women“ and convince Japan’s PM Shinzo Abe that he needs to acknowledge Japanese guilt and responsibility!

Dear reader, join us again tomorrow to learn more about the complex explanations for the perpetration of wartime sexual violence.