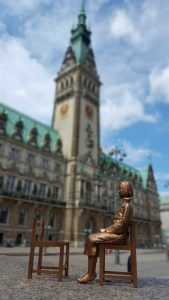 Hak-sun Kim was the first woman to share her story in public. At a press conference in August 1991, she described her suffering as a “comfort woman”. Three months later, in December 1991, she filed a class-action lawsuit against the Japanese government. To watch Hak-sun Kim, check out Eileen’s website and the House of Sharing’s resources.

Hak-sun Kim was inspired to take her story public after 40 years of silence by a strong women’s rights movement in Asia and the growing public awareness on wartime sexual violence being a crime. Ever since, hundreds of women from many countries in Asia and from the Netherlands came forward to tell their stories.

Initially, the Japanese government tried to deny any involvement, but supporters of the women started to provide more and more evidence, including official documents from Japanese military archives. At the beginning of 1992, Japan’s Prime Minister Kiichi Miyazawa thus admitted the military’s involvement and appointed a research team to examine the evidence.

As a result of these official investigations, the Chief Cabinet Secretary Kono Yohei issued a statement on 4 August 1993. It acknowledged that the Japanese military was “directly or indirectly” involved in the recruitment and transport of “comfort women” and the establishment and management of the “comfort stations”. It further conceded that women and girls were recruited “against their own will, through coaxing coercion, etc.”

The “Kono Statement” included an apology and an expression of “remorse to all those, irrespective of place of origin, who suffered immeasurable pain and incurable physical and psychological wounds as comfort women.” It concluded by promising to “never repeat such a mistake by forever engraving such issues in our memories through the study and teaching of history.” In accordance with this commitment, the Japanese government encouraged publishing houses to include references to the history of the “comfort women” in school textbooks.

At the time, the survivors and their supporters critiqued that Kono made a distinction between moral and legal responsibility and was unwilling to assume legal and financial responsibility.

Instead of acknowledging the women’s demands, however, Japanese politics have been characterized by a severe backlash ever since 1996 when nationalist politicians, academics, journalists and right-wing political groups began a fierce campaign against the changes in school textbooks, claiming that the comfort women system was not systematic sexual enslavement but a legitimate prostitution business arrangement.

Japan’s current Prime Minister Shinzo Abe has been one of the most vocal agents of this position right from the beginning. He has been associated with extreme nationalist groups such as the “Association of Liberalism View of History” and the “Association of Young Parliamentarians for Japan’s Future and Historical Education,” both of which have been at the forefront of the movement denying the existence of the Japanese system of military sexual slavery.

As a result, no school textbooks in Japan refer to the “comfort women” any longer. All publishers have submitted to the powerful political pressure of Shinzo Abe and his supporters in the Ministry of Education and other official institutions.

Since the survivors of the “comfort women”-system are all in their 80s and 90s by now, they will not be able to personally stand up for their rights much longer. Hak-Sun Kim, the first woman to speak out in public, died in December 1997, before her court case came to an end.

But, Mr. Abe, you are wrong when you think this problem will just go away with time. The soul of the girl and her supporters will continue to haunt you, will follow you, wherever you go.

Dear reader, we hope you join us tomorrow to know more about the Wednesday demonstrations in Seoul, Hamburg and around the world.